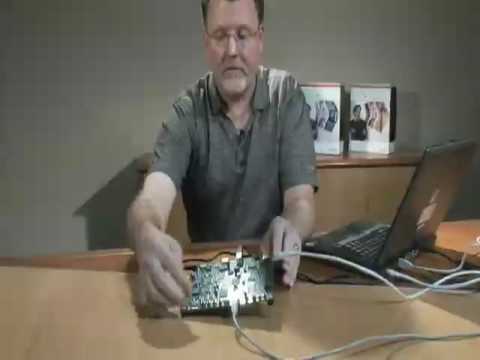 So you're sick of just mining on your GPU, and not a fan of the electric bill after a month of mining? There has to be a better option out there than your loud GPU in your gaming computer. There is!
Shortly after GPUs became popular for bitcoin mining, enterprising folks started looking at other things they can re-purpose to mine bitcoins more efficiently. Around mid-year 2011, the first devices sprang up that are called FPGAs or Field Programmable Gate Arrays. These are nothing new to the hobbyist community, they've been around for a while for crackers and other security-conscious folks looking at ways to defeat cryptographic locks. Hey! I know something that uses cryptographic calculations to secure its network! BITCOINS! Yep, so some miners developed their own boards and slapped some FPGA chips on them (most commonly the Spartan-6), and wrote specific firmware and "bitstreams" to more efficiently calculate bitcoin hashes. The first generations were sort of slow, but still they had better efficiency than a GPU. Some of the latest generation included the Icarus boards, Cairnsmore, x6500, and ModMiner Quad.
In early 2012(i think my timeline is right), Butterfly Labs(BFL) was selling their own FPGA miner that hashed at 800 Mhash/s using 80 watts and only cost US$600 amazing! These grew very popular, but people could see that FPGAs still weren't the most efficient way to hash their shares. BFL then announced that they would be designing their own chips that would be orders of magnitude faster than anything ever seen. These would be the ASICs (or Application Specific Integrated Circuit)everyone is raving about. ASICs are--as the name implies--specifically designed for one thing, and one thing only. Bitcoins. This is all it can do, and can't really be repurposed like an FPGA to other applications. Who wouldn't want a US$150 "Jalapeno" that hashes at 3.5 GIGAhashes/s using only power from a USB port?? Crazy! So summer 2012, BFL says they will ship before Christmas. Various things happen and we now still don't have any confirmed ship dates from BFL.
A few other companies have sprouted up, ASICminer which I believe is developing their own chips to mine themselves, but in a responsible way as to not threaten the network with a sudden influx of hashing. bASIC was a fiasco that was developed by the creator of the ModMiner Quad(which is actually a fantastic miner, I own one, and love it.) where he took many preorders, promised lots of people amazing ASIC performance, but in early 2013 the stress of the whole endeavour got to him and he gave up, refunded money(I think it's still being refunded now, or maybe it's been cleared up already.)
Avalon is the only company we know has ASIC mining hardware in the wild. It is not certain exactly how many are out there, but they have been confirmed by independent sources. The Avalon units are expensive(75 BTC) and have been in limited production runs (or batches) of a few hundred units that were pre-sold out very quickly.
All of this info is gleaned from the Custom Hardware forum over at bitcointalk.org over the past year or so I've been involved in bitcoin. I may have some facts wrong, but this is the gist of the situation and hopefully gives you an insight on the state of the hardware war against bitcoin
Thanks for reading!

some thoughts on litecoin mining hardware

I'm slowly learning about bitcoin and litecoin. I've thought a little lately about litecoin mining hardware. This is my analysis. I've only had tangential exposure to hardware design, so my estimates or assumptions might be off. Feedback welcome!
The scrypt litecoin hash function is dominated by an operation called a salsa: it runs 2048 salsas for each hash, and each salsa involves reading/writing a 128B block from a 128KB scratch buffer. The requirement to have a 128KB buffer for each running hash is what makes scrypt difficult to accelerate. The 128B blocks are written successively in the first phase of 1024 salsas (the output of each salsa), and then read randomly in the second phase of 1024 salsas.
I thought about implementing the salsa on a Xilinx FPGA. I implemented a few salsa building blocks to get an idea on timing. The Xilinx chips have 2KB distributed blocks of RAM, but there isn't nearly enough on-chip memory to support many concurrent hashes. One idea is to store every 64 salsa output in the first phase, and then recompute intermediate salsas as needed. This means you need to do an expected 32 extra salsas for each salsa in the second phase.
Based on my experiments, it seemed like a 32 clock (latency) salsa running at 200+MHz is possible (or better, but this seems like the right order of magnitude) on an Artix-6 which costs about $300. The Artix-6 has 730 2KB buffers. Thus, I estimate:
This gives 0.44KH/$. A 7970 card gets 1.75KH/$. We're off by a factor of 4 in price/performance. This design might work in an ASIC. In a custom design, you can tune the trade-off between memory and computation, and probably improve the speed estimates above. I'm still trying to estimate the cost of such an ASIC design, but I'm a little out of my depth.
I started to wonder why a 7970 gets such awesome price/performance. The other options is to put the 128KB blocks in DRAM. You don't need that much memory: 1GB gives you space for 8K concurrent hashes. But now you need high bandwidth to feed the salsa units. Each salsa reads 128B. A 7970 has a 260GB/s GDDR5 memory interface. That's
Actual reported rates are around 700KH/s. I think that is because of the random access patterns in the second phase of salsas. That's about 1.75KH/$.
So the other option would be an ASIC with the salsa units and a GDDR5 memory interface like a 7970 board. I estimate (from octopart.com) the cost of the 3GB of DRAM on a 7970 card is about $60. Let's say the ASIC is $20 (about the cost of the bitcoin ASICs, but it might be wildly inaccurate for a chip and package that can support a 384 bit GDDR5 memory interface). Then we get 8.75KH/$, or about 5x the GPUs.
Unfortunately, GDDR5 is a bleeding edge memory standard. An FPGA couldn't possibly manage that level of performance at this point. Designing a GDDR5 board and memory controller would probably be extremely difficult.
You could ask, what is the fatest DRAM interface supported by an FPGA? The Spartan-6 (approx $90 and up) can support a 64-bit DDR2 PC-800 interface. That's 1.6GB/s, so
A DDR2 PC-800 DIMM is about $14. That's a pathetic 0.06KH/$. You can manage 1066 or 1333 in a faster part, but that doesn't help price/performance.
tl;dr: Trading memory for recompute puts FPGAs about 4x behind GPUs for price/performance in rough estimate. Same idea for ASIC is worth a closer look. GPUs are surprisingly efficient for scrypt! ASIC+GDDR5 memory is competitve, but design is out of reach for mere mortals.
edit: formatting.

Has anyone thought about using FPGAs to mine litecoins? In particular, I was thinking about Xilinx Vertex FPGAs, which have large amount of block RAM, which might be useful for the litecoin RAM-intensive hashing algorithm. However, they don't have enough block RAM to saturate the logic with hash units, so you'd still need a board with off-chip RAM, although not much. On the downside, they are much more expensive than the Spartan FPGAs most FPGA Bitcoin miners seem to be using.

SELLING FPGA BITCOIN MINERS - MODMINER QUAD
https://post.craigslist.org/imagepreview/m/3K43Me3J65L55E95Mcd41a17771ccf5591e55.jpg https://post.craigslist.org/imagepreview/m/3Eb3Fb3Lc5I25G95Fbd41ec1e412c6c5b1b05.jpg
The ModMiner Quad is a highly efficient FPGA Based Bitcoin Mining Device.
Price - 2 BTC each (Lowered Price) - Only accepting Bitcoins! I'm selling some FPGA Bitcoin miners due to me making room for my ASIC coming in, so I can work out the prices on these.
It features up to 4 Spartan-6 LX150 FPGA Chips that are Capable of doing up to 210Mhash each at 10 watts
For a total Unit Speed & Efficiency of 800+mhash @ only 40 watts
Compatible with the popular BFGMiner and CGMiner Bitcoin Mining Software
Also many other people have found other uses for this great device, it will easily load any Bitstream / firmware you load onto it and be used for a plethora of other applications including protein folding , DNA mapping and pretty much any distributed computer project / algorithmic application or any other thing you can through at it. A truly multi purpose Spart-6 LX150 Device, this baby is idea for all kinds of distributed computer applications, hobbyist password cracking and many other applications If you would like a powerful long lasting and multi-purpose FPGA calculation device the Modminer Quad is for you! Contents: 1x Backplane 4x Spartan 6 LX150 FPGA cards with heatsinks + fans 1x USB miniUSB cable Features: 4x Spartan 6's 800+mhash @ ~ 40 watts USB interface for configuration and communication 72MHz ARM Cortex M3 for USB interface Our own custom Firmware Super easy firmware updating for the ARM chip Temp sensor on each FPGA card Heatsink w/ cooling fan on every card 4x 3-pin headers to power standard fans Draws from the 12V supply with 5A fuse at the Molex connector LEDs to indicate that the FPGAs are configured properly Modular design for seamless FPGA upgrades and repair
Price - 2 BTC each (Lowered Price)
Click here to order - https://payment.mtgox.com/4f4a7094-24e4-4cd6-947a-4ad6ad3ad856
My Cragislist Ad - https://post.craigslist.org/manage/3715775953

Cairnsmore1 FPGA Bitcoin Blakecoin Vcash Miner CM1 Xillinx Spartan 6 Vanillacoin Price : 325.00 Ends on : Ended View on eBay . Post navigation. Atari Founder Nolan Bushnell’s X2 Games Acquired by Global Blockchain. DocuSign Will Add Ethereum Blockchain Integration to Verify Signatures. Field programmable gate array (FPGA) is an integrated circuit designed to be configured by the customer or designer after manufacturing—hence "field-programmable".FPGAs are integrated circuits that can be tailored to suit a particular task like mining bitcoins, after their manufacturing thus creating ASIC. Above you do some calculations but it is not clear how you got to the h/s 1,600,000 for the Xilinx Spartan 6 CM1 and no idea about the hardware costs involved. I would like to recalculate it for the Spartan-7 to see if if makes sense. I know maybe mining bitcoin or Litecoin is not your recommendation because of the network difficulty. These were actually used quite a bit when fpga bitcoin mining got popular. Each spartan6 can hash around 200mh, so if you have 3 of them you should be around 600mh/s I think: Spartan-6 LX150s have about 10 times as many logic cells as my LX16. Not sure if it scales linearly, but that would give me maybe 20 MH/s. Continue this thread The latter variant is optimized for cryptographic computations such as Bitcoin Mining and allows to build up FPGA clusters using standard components (USB cables and USB hubs). The Software typically achieves hash rates of 90MH/s on Spartan 6 LX75 FPGA's and 200MH/s on Spartan6 LX150 FPGA's.

Easily get started on your next generation FPGA design with the Xilinx Spartan®-6 SP601 Evaluation Kit. This kit contains everything you need to begin designing today. In this video I will be reviewing the ZTEX Spartan 6 FPGA module which I will probably working a lot more with in the future, as it's currently my only Spartan 6 board. ... BFL Bitcoin Mining Rig ... Getting Started with Xilinx ISE 14.7 - EDGE Spartan 6 FPGA Kit by All About FPGA. 7:09. EDGE Spartan 6 FPGA Development board by All About FPGA. 1:49. Language: English This is an implementation of the 256-bit portion of the Rijndael AES algorithm on a Nexys3 (Spartan 6) FPGA demo board Switch Operation: The 128-bit data input three MSB are simulated by switches ... Getting Started with Xilinx ISE 14.7 - EDGE Spartan 6 FPGA Kit - Duration: 7:09. AllAbout FPGA 4,234 views. 7:09. Revised: 3D Printing - 13 Things I Wish I Knew When I Got Started - Duration: 30:37.